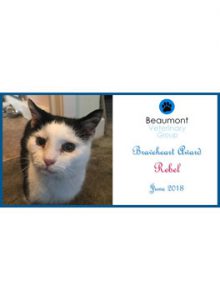 Rebel is a 21 year old cat who is a fighter and has stolen the hearts of everyone involved in his care!

Recently, Rebel presented for investigations to determine the cause of his reduced appetite. X-rays revealed a suspicion of a diaphragmatic hernia as well as a partially collapsed lung and an abnormally shaped sternum. Rebel also has a small mass in his mouth as well as in his abdomen.

Despite all of these issues he is doing remarkably well with the help of medications but more importantly he keeps a fighting spirit.

We are using cookies to give you the best experience on our website. Find out more about which cookies we are using or switch them off in settings.

Our website uses cookies to distinguish you from other users of our website. This enables us to provide you with a good experience when you browse our website and also allows us to improve our site.

You can find out more on our cookie page at any time.

If you disable this cookie, we will not be able to save your preferences. This means that every time you visit this website you will need to enable or disable cookies again.

This website uses Google Analytics to collect anonymous information such as the number of visitors to the site, and the most popular pages. Keeping this cookie enabled helps us to improve our website.

Please enable Strictly Necessary Cookies first so that we can save your preferences!